You are here: Home » News Center » Glass is an important material for the advancement of human civilization

Glass is an important material for the advancement of human civilization

Glass is an important material for the advancement of human civilization

Glass, light, time, cold, and cleanliness are just a few of the commonplace concepts that have led to the development of world civilization. How we got to now is a new way of thinking through the lens of historical development.

Ancient Egyptians, discovered a substance between water and crystals ~ glass. Melting the sand, quickly cooled, that is the solid "flowing sand", light enough to penetrate.

Beautiful appearance, so that this one technology first turned into a ritual sacrament. The glass "holy beetle" is a famous glass of the pharaohs burial objects.

In 1317, the glass manufacturer Angelo Barovia found that the seaweed rich in potassium oxide and manganese added to the molten glass liquid, cooled to produce an unusually crystal clear colorless glass. The appearance of colorless glass directly triggered the invention of eyeglasses (including later telescopes, microscopes, etc.). Books printed from Gutenberg reduced the cost of reading, and the simultaneous appearance of glasses and printing triggered a sudden increase in literacy.

Adding a layer of tin and mercury mixture to the back of glass to form a highly reflective surface made of mirrors. The advent of mirrors was awesome. At that time, ordinary people might never see themselves in their life, or just see their distorted and deformed faces on the surface of water. Humans finally saw themselves and knew themselves. Lewis. Lewis Mumford (LewisMumford) wrote in Technology and Civilization: "Self-awareness, self-reflection, talking to the mirror, all of these followed the development of this new thing itself."

The island of Murano, near Venice, was an important area for the development of the glass industry. So, the Renaissance first appeared in Italy.
If this one technology had also been available in China at that time, perhaps there would have been a revolution of ideas as well, and perhaps the best works left by thinkers and many poets would have been much more than their present state.

It is important to talk about glass fibers (strength, light conductivity).
The earliest was due to the purpose of measurement and the desire to use glass to improve measuring tools. Boyce built a bow and when the crossbow arrow was shot, the molten state of glass glued in advance to the crossbow arrow became the first glass filament, which reached a length of 90 feet. The strength of this one glass filament was found to be very high.
In recent times, people made glass into fiber industrialization, there are everywhere insulation equipment, surfboards, protective caps, circuit boards. The fuselage of the Airbus A380 is a composite of aluminum and glass fiber.

How do optical fibers appear? As mentioned earlier, glass is a solid form of water, and in 1870, the Royal Society in London, England, witnessed a thought-provoking demonstration by natural philosopher John Tyndall. Using a stream of water flowing from one container to another and a beam of light, Tyndall demonstrated that light uses internal reflection to follow a specific path. As the water pours out of the nozzle of the first container, Tindall aims a beam of sunlight into the path of the water. The light, as seen by the audience, traveled along a zigzag path within the curved path of the water.

This phenomenon led to the development of glass filaments that could flexibly transmit light signals, and to the carrier of optical communication - optical fiber. 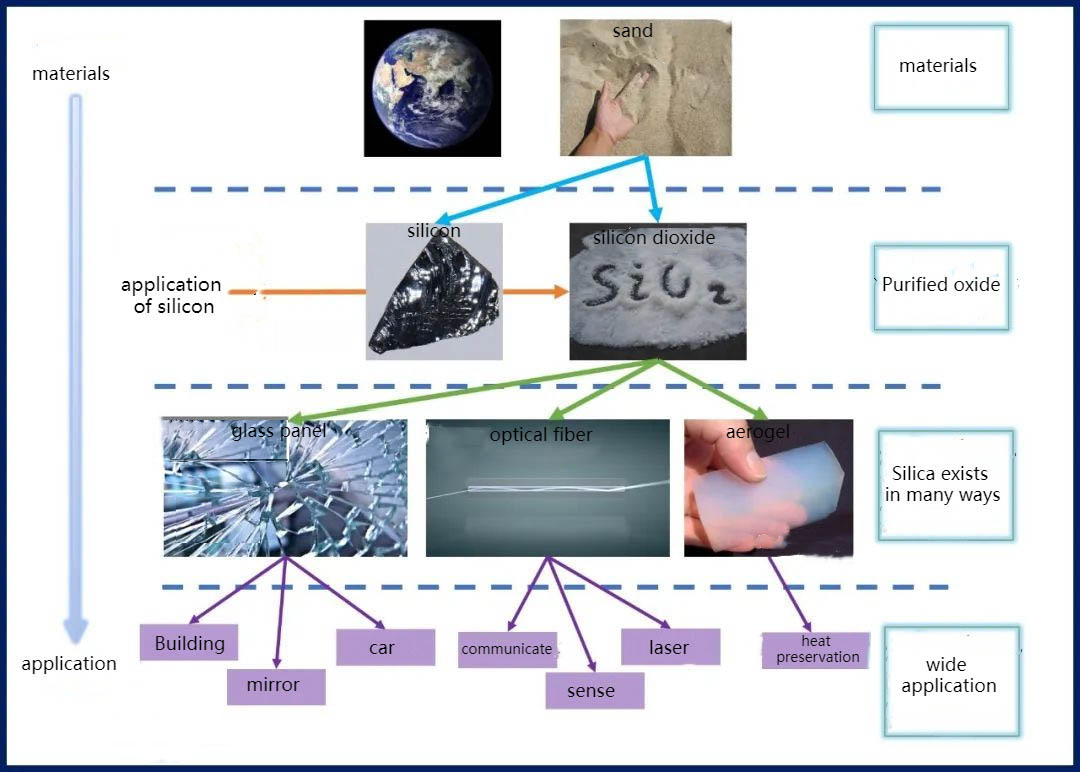 This diagram depicts the process from raw material to application. The first top layer is silica (shown in the form of sand), which is highly abundant in the earth's crust. The second layer is pure silicon, which can be obtained with high purity through reduction and purification techniques, and is used in many applications. Silicon dioxide exists in different forms, and this is the third layer, panel form, fiber form, film form, and aerogel (the lightest solid), etc. The fourth layer is the very wide range of applications.
The material of optical fiber is silica. But at the beginning of the development of optical fibers, there were many other material options, such as fluoride glass. Continuing to study the energy levels of the particles and adjusting the transparent material, people realized the laser again.


Why is silica a commonly used material for optical fibers? Because silicon and oxygen are the first and second most abundant in the earth's crust, and are "easily accessible". Silica solids also show exceptionally outstanding light-conducting properties, so the material of optical fiber is silica glass. The next generation of optical fiber material may be air, because it seems to be more accessible.